The Daily Grind Table of Contents
At least she didn't actually say, "Goodnight, Malvolio." I don't need a visit from the ghost of Gracie Allen tonight.

Book XIX is Window Box and Chapter 5, the 113th storyline overall, is "Resonance."


The Daily Grind Table of Contents
Everywhere Scratch goes, he has to deal with this sort of thing! It's such a shocking state of affairs!
Read more

One Way to Write a Medusa Poem 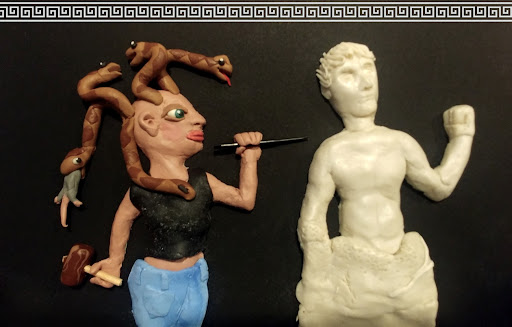 For half a decade now:

I've been participating in the more-or-less monthly writing contests on The Writeoff Site. They started out strictly accepting nothing but fanfiction inspired by the current My Little Pony cartoon series and alternated between minific contests—twenty-four hours to write 400 to 750 words on a prompt nominated and selected by the participants—and short story contests—seventy-two hours to write 2,000 to 8,000 words again somehow related to whatever prompt got chosen. All the stories found here—just over 195,000 words all told—are things I wrote as a result of these contests.

Then in 2015, the Australian fellow who runs the site decided to add original fiction to the mix. These contests also came in minific and short story flavors, and several of the stories I've sold since then—"The Procession of the Equinoxes" in the Gods With Fur anthology, for instance, and "To Drive the Cold Winter Away" in Exploring New Place—had their …
Read more